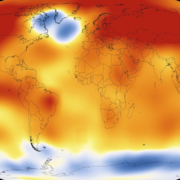 WMO (World Meteorological Organization) has published the provisional statement for 2016 to inform United Nations Climate Change conference taking place in Morocco on the occasion of COP22.

These data, updated to September, show that global temperatures in 2016 are around 1.2 °C above pre-industrial levels. Preliminary data for October indicate a sufficiently high level for 2016 to be the hottest year on record. This means that 16 of the 17 hottest years on record have been this century.

Other climate-change indicators are record breaking. Levels of greenhouse gases in the atmosphere are still increasing; arctic sea ice levels on the contrary are very low; major heatwaves and flooding are becoming regular.

“Temperatures were above the 1961-90 average over the vast majority of land areas” WMO statement reports. “Temperatures were above normal over most ocean areas. […]Coral mortality of up to 50% was reported in parts of the Great Barrier Reef. […]Global sea levels rose about 15 millimetres between November 2014 and February 2016 as a result of El Niño, well above the post-1993 trend of 3 to 3.5 mm per year”.

In this scenario, WMO underlines the importance and urgency of putting the Paris Agreement into action. The Paris Agreement came into force in record time, if compared with other climate agreements, but the most important thing now is not to stop. “WMO is working to improve monitoring of greenhouse gas emissions to help countries to reduce them” says WMO Secretary-General Petteri Taalas.

Sign up
COP22 started with Paris Agreement entered into force

Our solution to stop corrosion, even in high risk conditions
Scroll to top