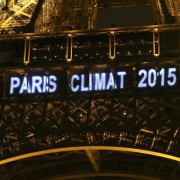 On Monday the 30th of November 2015, world leaders will gather together in Paris for the 21st Conference of the Parties. The purpose of the COP21 is to achieve a universal agreement on climate, with the aim of keeping global warming below 2°C.

Mark Kenber, CEO at “The Climate Group”, writes about the upcoming event and shows some signs of optimism, as he says that we are in a much better position than we were in the lead-up to the last major attempt to secure a successor to the Kyoto Protocol, in 2009 at COP15 in Copenhagen.

And it seems he is right, since 158 countries, representing the 88% of the world’s population and almost the 90% of all greenhouse gas emissions production, have submitted their INDCs so far. Intended Nationally Determined Contributions are climate plans in which countries explain how they are going to reduce carbon emissions and which are going to be independent of what will be agreed at COP21.

In September, during the latest EU Environment Council, the European Union remarked that the Paris agreement should be ambitious and legally binding. This statement is echoed by the China’s chief climate negotiator, Xie Zhenhua, who pushes for a powerful, ambitious and legally binding deal as well. Not only. Zhenhua also remarks the need for the so-called developed countries to do their parts to support developing countries to reduce carbon emissions, through the USD 100 billion plan.

The UNFCCC has recently published a new report titled “Climate Action Now. Summary for Policymakers 2015“, which stresses the urgency of the need to move towards a low carbon economy in order to keep global warming below 2 °C. According to the UNFCCC, a combined action from both countries and non-state actors – such as investors, businesses, NGOs – is required to bring technology and policies to foster emissions reduction.

Many good and important initiatives have been carried out around the world so far, but there is still much to do.

UNFCCC calls for example for a scaling up of low carbon investments, underlining the co-benefits deriving from this action, such as the major energy security, the major energy access – we should not forget that today nearly 1.3 billion people in the world do not have access to electricity – and a general health improvement.

One of the main solutions to achieve a low carbon economy is represented by renewable energy, a sector that, excluding water power, accounted for the 9% of global electricity generation in 2014, with an increase in investments of 500% since 2004. This call for the improvement of renewables comes also from the new WBCSD report, where sixteen leading companies call to double renewable energy capacity by 2025. The report underlines that scaling up renewables would facilitate the achievement of the 2°C target, and in addition to this, it demonstrates that renewable energy is feasible, reliable, increasingly competitive and an economically viable solution.

To know something more about decarbonisation and climate action, there is nothing left to do but wait for the COP21.